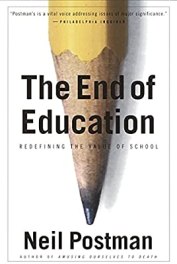 In the preface to his great book, The End of Education: Redefining the Value of School, Neil Postman pointed out that in “in tracking what people have to say about schooling, I notice that most of the conversation is about means, rarely about ends. Should we privatize our schools? Should we have national standards of assessment? How should we use computers? What use can we make of television? How shall we teach reading? And so on. Some of these questions are interesting and some are not. But what they have in common is that they evade the issue of what schools are for. It is as if we are a nation of technicians, consumed by our expertise in how something should be done, afraid or incapable of thinking about why.”Postman argued that the why really matters. If we don’t consider the aim of education we will not be able to create effective schools. Worse still, we may well create an educational system that gets in the way of the ends we implicitly desire but have never clearly formulated. So how do we move from means to ends? How do we discover the real purpose of education? Sometimes it takes a crisis to focus our minds.

As crises go, they don’t come much bigger than the Second World War, so it’s no surprise that, as the war gradually drew to a close, people across the world started to plan for what came next. Many ideas were thrown into the public debate about education. Some suggestions were impractical, others were unaffordable, but a few eventually saw the light of day. In England the Butler Act was passed in 1944, leading to lasting and radical change, with most Local Education Authorities now offering three school streams: grammar, secondary modern and technical.

However, the debate about the nature and purpose of education was not ended by the 1944 Education Act. We could look at many books that were published at this time but focussing on just one – John Newsom’s Willingly to School: The Future of Education – is enough to give a sense of the whole debate.

In attempting to fathom the true purpose of education, Newsom was critical of limited educational aims, especially the narrow end of a secure, well-paid job. While acknowledging parents’ legitimate aspirations for their children, he argued that there was more to education than the desire for a ‘good job’ and that the real purpose of education was “to produce people with the mental and spiritual qualities which will enable them to participate intelligently in local and national affairs.”

In 1944, it seemed a truism for Newson to write “that democracy as a form of government is only possible when the citizen is qualified to exercise his political power,” which meant that “one of the principal purposes of education is to develop a sense of values whether ethical, aesthetic or political.” Developing a sense of values was important but many people wanted more. There was a widespread assumption at the end of the war that embedding civic values in the structures and curricula of newly reformed schools would effect a social and political transformation.

Sadly, as events of the last 75 years have shown, that simply did not happen. Why this should have been the case is a vital question for our times if only because the assumption that social and political ills can be dispelled by educational reform still holds sway day.

The problem, I think, is essentially anthropological. Despite the horrors of two world wars, educational thinkers from every part of the political spectrum were still in thrall to an essentially Rousseauesque conception of human nature in the 1940s, believing that all that was required to effect lasting political and social change was the reformation of political, social or educational structures. Human nature, it was assumed, would simply fall into line. Rather than prompt a reassessment of these anthropological presuppositions, the political, social and educational failures of recent decades have merely led to further tinkering with the structures.

Framing the educational debate in this way is bound to be controversial because there is no longer widespread agreement about the nature of the person. Given their anthropological assumptions, atheists and agnostics may well accept an essentially utilitarian approach to education, though agreeing on the precise utilitarian aims that should be embedded in any educational system is still fraught with difficulty. However, for anyone who accepts that “God made me to know him, love him, and serve him in this world, and to be happy with him for ever in the next,” as the Penny Catechism puts it, the purpose of education can never be merely utilitarian. Neither getting a ‘good job’ nor participating ‘intelligently in local and national affairs’ can ever be the end of our educational ambitions.

There are still dangers for theists, though, who are liable to argue for the replacement of a lower form of utilitarianism with a higher one. The purpose of education, Christians sometimes say, is heaven. Hedged about with certain caveats, this statement may be true but it is surely significant that John Henry Newman’s famous argument in The Idea of a University that knowledge is its own end leads us firmly away from utilitarian arguments. If we follow Newman’s lead, we would have to say that the purpose of education is neither a job, nor democratic participation, nor even entry into heaven, but knowledge. Knowledge is the goal towards which we aim.

The trouble with the idea that knowledge could be the purpose of education is that it is difficult to market. Very few people would go to the wall for knowledge. However, it is also true that we have allowed the concept of knowledge to be diminished. It does not mean mere facts divorced from their proper context. It means grasping the essential, appreciating all that is true, beautiful and good, and being wide-eyed about all that drags us down. Knowledge, in a word, is liberating.

That is why, in the Christian worldview, the highest form of knowledge is the knowledge of God, a knowledge that necessarily changes our understanding of the very nature of education. Knowing God extends our horizons, broadens our worldview, and heightens our sense of wonder. Knowing God has nothing to do with assimilating facts but consists in loving, serving and being happy with him in this life and, ultimately, in heaven.

Newman’s views have resonated widely beyond the original context in which he delivered them and continue to inspire people from many different backgrounds. If knowledge is its own end and the purpose of education is knowledge then that must transform our understanding of what education is all about and even where it takes place.

If the purpose of education is knowledge then everything we do with our children is a form of education, and if everything we do with our children is education then there is a great deal more to education than what takes place inside our schools, colleges and universities. “It is not written in any holy book … that an education must occur in a small room with chairs in it,” as Neil Postman wrote. But that, maybe, is a topic for another day.